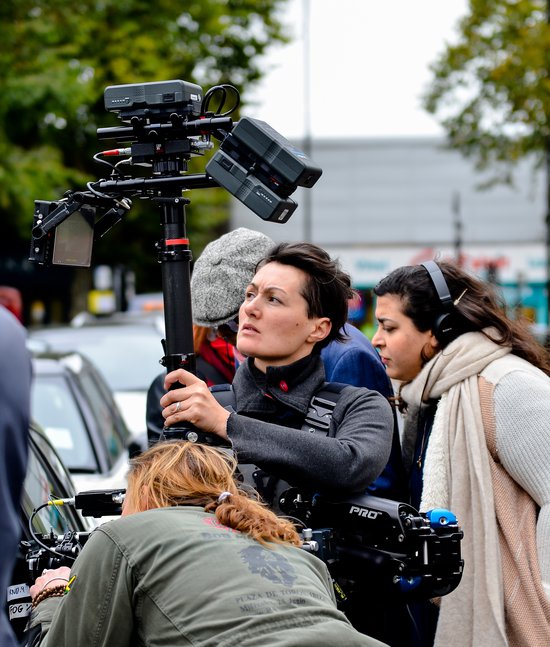 Svetlana Miko ACO is one of the few professional Camera Operators that specialises in Steadicam and Arri Trinity. With over 17 years experience in the industry, her more recent credits include Batman, Ant-Man III, The Eternals, Emily, The Colour Room and Bridgerton.

It has to be ‘trust your instinct’. We are complex as human beings, but I find instinct is a natural powerful tool for so many things in life, including work.

I live with my family in Dorset, near to the beautiful and windy coastline. A place to come back and enjoy. It feels a long way from my birthplace in Moldova. I am lucky to be based in UK because it is so international and is a melting pot of so many opportunities and freedoms. I don’t think there is an easy ride wherever you are based, but I love and always appreciate UK for the human freedoms that it has compared to so many other places in our world.


WHAT INSPIRED YOU TO BECOME A STEADICAM OPERATOR?

It was a natural choice for me as I am, and always have been, interested in human stories. The art of filmmaking stood out for me. I love the format but I also love the physicality the way an operator is part of the process. To me, it is the joy of being lost in executing a shot, but also being amidst the wonderful and amazing creative collaborations; being a part of the triangle of vision between operator, cinematographer and director is great.

I haven’t had a mentor as such, but I would advise those starting out and even later on, to not be too shy to ask. We are also lucky to be in a time where there are more schemes available, I would encourage anyone to consider it. I am fortunate to be able to give back to the film community where I can and am finding mentoring new starters very rewarding.

I can probably think of two main challenges. One is to not question yourself because it can sometimes take you away from your focus. The second is trying to achieve a work life balance, a tricky one in our industry.

There are some formidable female cinematographers like Agnes Goddard or Ari Wagner to look up to and pioneer steadicam operators such as Liz Ziegler, but I have always been inspired by the shot, not necessarily by who made it.

My advice would be not to be so serious and enjoy it more. Haha.

My job is easy because I enjoy it. It would be nice for there not to be any bias for jobs, but unfortunately there still is to a degree. As a woman, I challenge the stereotypical image of operator, especially steadicam, which is a good thing I think.

Certainly there has been a big shift in openly talking, having a greater transparency and support from our community that have risen to the challenge. Time’s Up has done so much to kick it off and say enough is enough which is amazing. I do think that we still have a long way to go but without a doubt the change is happening.

I have a lot of equipment which is wonderful-I’m a bit of a tech nerd. I think that all I need is an open mind, which makes often dealing with the unexpected a bit more fun.

Working every day with so many great Cinematographers like Greig Fraser ACS, Ben Davis BSC, Kate Reid BSC, Nanu Segal, Oliver Curtis BSC, Mike Eley BSC to name just a few. Sitting in the the Batmobile was a pretty cool moment too!

I just discovered the hand drum which I love, but I do have a young family which meant being home full-time gave me an invaluable time with them, see them grow and bond which felt like a luxury especially as we normally work away from home so often.

Street photography and graffiti art has always been a passion of mine. I would love to take up sailing and paragliding when time permits, that would be amazing.

I originally started a Law degree but I decided to swap to film.

It has to be ‘trust your instinct’. We are complex as human beings, but I find instinct is a natural powerful tool for so many things in life, including work.