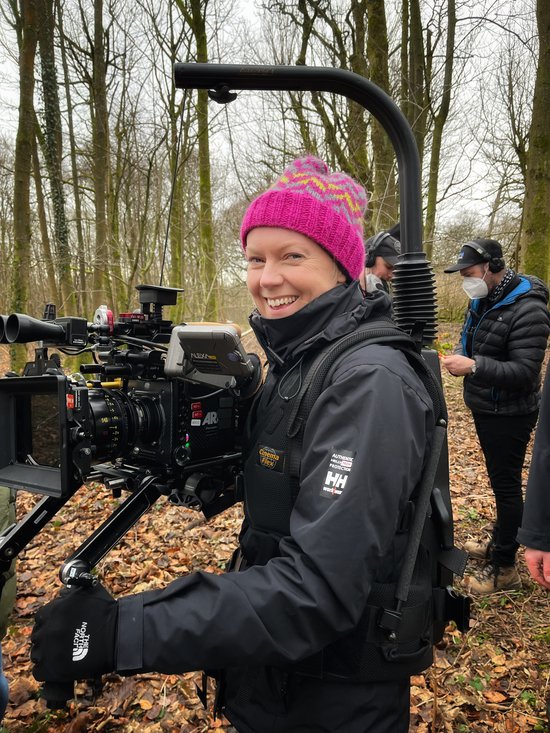 Kate is known for her work on Game of Thrones, The Nevers and the upcoming HBO series The Baby which is set to release April 24th 2022.

Don’t compare yourselves to others, everyone is on their own journey. Trust that you are where you need to be, and do your best to enjoy each part of the process.

I grew up in Scotland and I think the light and dramatic long winter shadows has influenced the images I enjoy and create. Plus nothing makes me happier than filming in big landscapes! I recently moved to Edinburgh but work a lot in London.

WHAT INSPIRED YOU TO BECOME A CINEMATOGRAPHER?

As a child I loved the magic and excitement of going to the cinema and being consumed by this enormous image up on the screen. I also loved painting and drawing and did both almost endlessly, making images in this way. But when I was younger I didn’t know there was such a role as a Cinematographer in filmmaking. I believed it was the director who was responsible for the all the visual aspects of a film.

I never had a formal mentor but there were several DPs who I met at different stages in my learning and development, that I could ask questions of and learn from and who I would still seek out today for advice. I would also credit my photography teacher for his encouragement and support of my work which gave me the confidence this was an area that I had natural ability in.

It was a harder industry to break into than I ever imagined, but once I learnt about this job it was the only thing I could see myself doing, so I just kept going. From my perspective now, older and hopefully a bit wiser, I would say the main challenges are the limits we place on ourselves.

Yes, several. I was lucky to work with Nina Kellgren BSC once as a loader and later was taught by her at the NFTS. I knew by name and their work Sue Gibson BSC, Cinders Foreshaw BSC and Ellan Kuras ASC and just the knowledge of these female DPs allowed me to believe it was a path I could follow. But it is really only now that I fully appreciate the debt I owe to these incredible women who broke new ground and made the career I am now having possible.

Don’t compare yourselves to others, everyone is on their own journey. Trust that you are where you need to be, and do your best to enjoy each part of the process.

THE TIME'S UP MOVEMENT IS NOW IN ITS FIFTH YEAR. HAVE YOU NOTICED ANY CHANGES SINCE IT STARTED?

I feel I am on more sets where there is a better balance of gender representation across most departments and specifically in the camera department. There are certainly more females pursuing careers as DPs and greater visibility of female cinematographers. This has been helped hugely by organisations such as illuminatrix in the UK, Primetime, and Free the Work, as well as the impact of Rachel Morrison’s 2018 Academy nomination for Cinematography as the first female to receive this honour. Culturally I feel there has been a sea change in perception of female DPs, meaning it is no longer seen as an inherent disadvantage to be a women in this role. I see more opportunity for younger female DPs coming up, which is not only a result of the Times Up movement, but I’m encouraged things are moving in the right direction if not as quickly as we all would like.

Patience and a sense of humour + my iPhone with its various apps is pretty instrumental.

I was just nominated for an ASC Award for my work on a television series called The Nevers which was pretty thrilling! It’s a rare moment where you feel you can benchmark ‘success’, but truthfully, being happy each day is how I measure success these days.

The undeniable importance of nature in my life. I spent much of my lockdown walking in the hills and now appreciate how vital this is to me.

I have recently taken up climbing. I’m late to the party on this but absolutely loving it.

As I write this today it would be ‘To thine own self be true.'


IS THERE SOMETHING YOU LEARNT ON THE BABY THAT YOU'LL TAKE WITH YOU ON FUTURE PROJECTS?

The old adage ‘never work with children and animals’ is definitely true! But one of the most beautiful takeaways was the experience of working on an entirely female-led project with a pretty gender equal and diverse set. The intention of the producers to create this environment fostered a completely different tone, one where I (and I hope everyone) felt more seen and heard. It was a shock to realise how absent this had been in varying degrees on the majority of productions I had worked on previously; but now I’ve had this experience, I will seek to bring more of this to future productions and I’m excited about what that can look like.